Kotlin is a programming language on the rise. Jetbrains, the brains behind this language, is putting a lot of time and effort in developing this language. Kotlin is already widely used for backend and Android applications and has excellent integration with Spring Boot. Kotlin is hot right now and has proven itself in practice. In both backend and Android applications, Kotlin is compiled to Java bytecode. It has seamless integration with Java. Making it possible to call Java classes from Kotlin and vice versa.

The idea is simple and not new; use a single project to build an application targeting both mobile, web and backend. The innovative part is sharing as much of the code as possible, instead of generating code for each platform. A lot of the logic is shared between platforms and the user interface is build natively. Developers build the application views like the are used to in iOS and android, but fill the views using shared logic. The philosophy is; let Xcode and Android Studios do what they are good at, but write the underlying code just once.

Business logic can be shared by different frontend applications. Models and validators for example can also be shared with the backend. No more inconsistencies between the back- and frontend! Refactors are also made easy, by refactoring all applications simultaneously automatically. 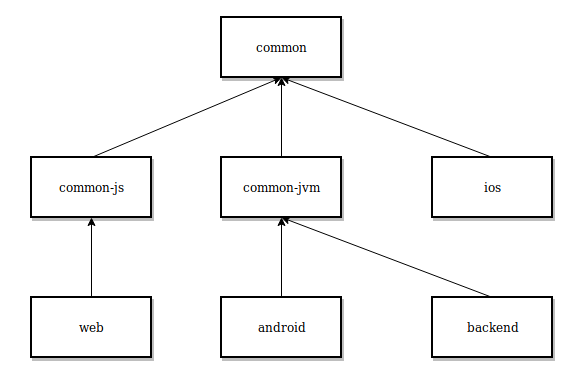 My enthusiasm is high because of the following advantages:

At this moment the above is only a vision of how Jetbrains wants multiplatform to work. The technology is in its infancy and for the time being is only used in two applications in practice. (The KotlinConf app and the Kotlin Academy, a website/app with blogs about Kotlin). My experience so far: getting an application up-and-running is a lot of trouble. The experimental status is very noticeable: the documentation and examples are often outdated and are very limited. Standard libraries don't always function well and experimental dependencies could break at any time when they are updated.

In the future multiplatform will hopefully develop as a production ready product. To achieve this multiplatform needs a stable core of libraries and more Kotlin JS frameworks. Right now React has a lot of potential! My recommendation is to not use multiplatform in practice in the near future, but definitely try it out and play with it!

Moskala, Marcin. Multiplatform native development in Kotlin. Now with iOS! Kotlin AcademySo how does that work?