What if we were able to mimic the events inside our brains and use them to increase the capabilities of our computers? What if we could make these machines go through a learning process similar to children learning how to walk? Would you be surprised to know that this is actually possible? Artificial neural networks are inspired by our own human brain and are designed to recognize patterns. Read on to discover more about the structure of artificial neural networks and how we can use them to make our computers learn! This blog will cover neurons, layers, error functions, and backpropagation.

Examining artificial neurons in Figure 2 more closely shows that each input has a certain weight attached to it. This weight indicates the significance of the input with regard to the task that the artificial neural network is trying to learn. The product of all inputs and their respective weights are combined and passed as a total input to the neuron.

Figure 2. The artificial neuron with inputs

An artificial neuron is a place of computation as input is passed through an activation function. This function determines whether, and to what extent, the signal progresses further into the neural network to affect the ultimate outcome. If an incoming signal progresses further into the network to other neurons, the neuron is activated. There are multiple activation functions, such as the well-known Sigmoid function or the ReLu function (see figure 3 for the latter).

Neurons are part of a layer (see figure 4). In this example, we see a layer made up of three blue circles and a layer made up of one purple circle. The neurons may be connected to a neuron in the previous or following layer. The connections between these neurons contain the earlier mentioned weight. 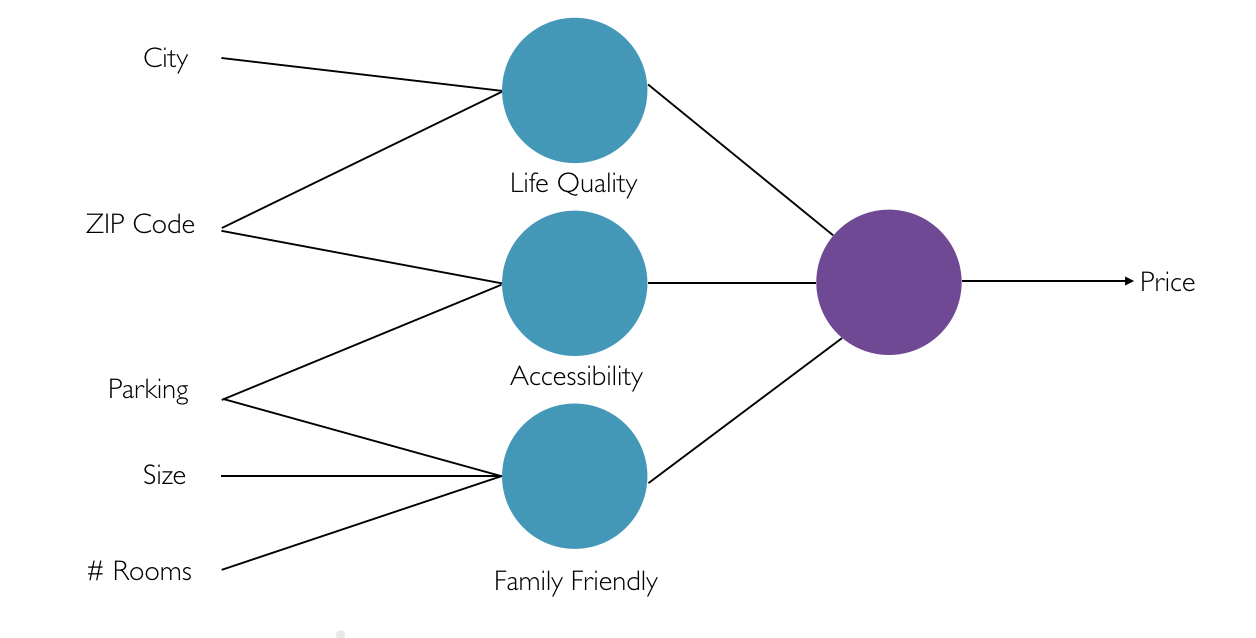 What kind of processes takes place inside these layers? Let's take the concept of predicting house prices. Humans learn from experience how they can predict house prices by combining multiple input values. Think of input values like:

In addition to the hidden layers, Figure 5 shows two more layers: input and output layers. The input layer is the first layer of the artificial neural network where input values are received, e.g. the city and ZIP code. The output layer is the last layer of our artificial neural network where an output value is provided, e.g. our house price prediction.

Figure 5. Different types of layers inside the artificial neural network

So far we've learned that an artificial neural network contains neurons in different layers with weighted connections between them. At the start of the process, passing input values into the network will return incorrect outputs. This is caused by the randomly initialized starting weights of the neurons. How wrong an artificial neural network prediction is can be determined using error functions (also known as loss functions) and labeled examples. To illustrate the use of error functions, let's continue using our example of predicting house prices by passing different values through the neural network (see figure 6).

Figure 6. Calculating the error of the artificial neural network

As the values progress through the network, it calculates the input to the neurons by making use of the input values and their corresponding weights. The right output value is determined by applying the activation function to the input value of the neuron. After processing these values, the neural network will eventually give an output of € 100.000. Unfortunately, we know that the prediction must have been € 200.000. The math in this example is easy and we can see that our network has an error of € 100.000 (the difference between the expected output and actual output). There are a number of error functions available which are slightly more complex than just calculating the difference between the expected and actual output. For example, you can use the Mean Squared Error function, which measures the average of the squares of the errors.

After calculating the error of the network, the next step is to optimize the network. This will minimize the error and the actual output will come closer to the expected output. The following paragraph explains how to do this by using the calculated error.

Neural networks can be optimized by applying backpropagation. During this process, we are going to backtrack through the neural network from the output layer, onto the hidden layers and to the input layer of the network. The assigned weight of each connection is updated by using the calculated error. Linear algebra determines the adjustments needed. For example, a partial derivative is determined. If you want to learn more about backpropagation and the mathematical calculations that are applied, I recommend reading Matt Mazur's blog. His blog provides a step-by-step backpropagation example.

Altering the weights will cause chain reactions inside the artificial neural network. The computations inside the network change as a different weight will change the input of the neuron. A new input will change the output of the applied activation function. Ultimately, this leads to a new output value. This process is repeated until the lowest possible error is achieved.